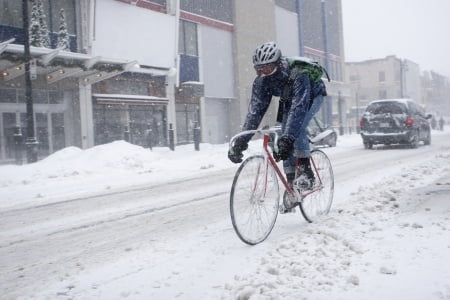 The ‘snowpocalypse’ that just descended on the Northeast could be the final straw that permanently alters the U.S. commercial real estate market and speeds up the establishment of new business and financial hubs in secondary markets.

Before the region even healed from Sandy the latest massive blizzard has shut down businesses, transport and interrupted businesses and work for countless individuals and companies. Even those organizations that make it through this second massive blow in tact and not forced into bankruptcy have to recognize that they cannot withstand much more if they hope to maintain their positions, never mind actually get ahead and be leaders in their given industries.

While government has woken up to the fact that drastic changes and infrastructure improvements are required they may not come about in time or in the form that many hope for. The cold season isn’t over yet and it won’t be long before we arrive in peak Atlantic hurricane season again. It isn’t an “if” the Northeast will be hit again; it is simply an inevitable “when”.

The answer could be far sooner than most are ready for as forecasts predict an incredibly active 2013 hurricane season. Current predictions call for 15 named storms, 8 hurricanes and 3 major hurricanes.

In New York Governor Cuomo is attempting to steer $400 million of recently approved Sandy aid to buy out coastal properties and bulldoze them to create a buffer zone and prevent another repeat of recent disasters. While this may seem crazy and perhaps ultimately benefits the state much more than the residents and businesses being bought out, it could be the best move.

Look out for similar moves all the way up the east coast from Florida to Massachusetts.

Now, not only will businesses be fearful of interruptions due to the weather and have to at least spread out operations to secondary markets to ensure business continuity, they won’t want to stay so heavily invested where their real property assets could be swept out from under them by eminent domain.

This is on top of current trends in firms from coast to coast shedding commercial real estate space in high rent distracts and moving further inland; for example Boston to Worcester in MA.

The same goes for homeowners too and as businesses migrate so will the jobs and need for housing, especially corporate housing and rentals.

We’ve already seen this shift begin, yet there is much more room for growth. Net leased fast food joints are going fast, multifamily property is being eaten up as fast as it can come on the market and the office market is looking up, especially with the continued presence of discounts on distressed properties and via non-performing loans for those thinking even further ahead.

Whether buy and hold is your normal investment strategy and focus or not, experts agree the biggest rewards are to be seen in these secondary markets like Worcester over the next year as companies and individuals move and re-position themselves.

Industrial, office, retail and multifamily apartment buildings in Worcester can be flipped either by acquiring REOs, mortgage notes or as short sales, acquired, improved and have value added to be turned over or held and matured with growing yields.

Still, while opportunities abound, the keys to success, profitability and realizing the best returns will be in the execution; specifically through property management, building maintenance and leasing.

Ready to Chat?
Make an Appointment